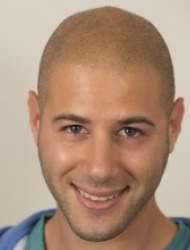 Dr. Ofir Hadad is a Teaching Fellow in the Department of Political Science at the Hebrew University of Jerusalem and a Postdoctoral Research Fellow in an ISF-funded project led by Prof. Oren Barak. His postdoctoral research focuses on the politics of place naming in divided cities.

Ofir received his Ph.D. in political science as part of the Advanced Graduate-Research Program (Telem) and was a fellow of the interdisciplinary doctoral program “Human Rights under Pressure” (a joint program of the Hebrew University of Jerusalem with the Free University of Berlin). Ofir was also a recipient of the President of Israel’s Scholarship for Academic Excellence and Innovation, and was the first fellow of the American Friends of Yitzhak Rabin Fund. His main research interests include law and politics, national security, conflicts, and political discourse.

Ofir’s courses for undergraduate and graduate students in political science include “Law and Politics in Israel,” and “The High Court of Justice and Israel’s Democracy.” Ofir was also a co-founder and the first academic coordinator of the master’s program in the Department of Political Science at the Hebrew University of Jerusalem: Law, Governance & Society.

Before beginning his studies, Ofir served as an intelligence officer with the rank of captain. He lives in Modi'in with his wife Merav and his daughters Geffen, Shaked, and Ella.

For his latest publications see:

For selected publications in the media see:

“The Twilight Zone: The Unknown Lives of the 'Threatened' Palestinians in Israel,” Forbes Magazine.

“5 Years for ‘Tzuk Eitan’: The Names Given by Hamas to IDF Operations in Gaza and What They Mean,” Mako.